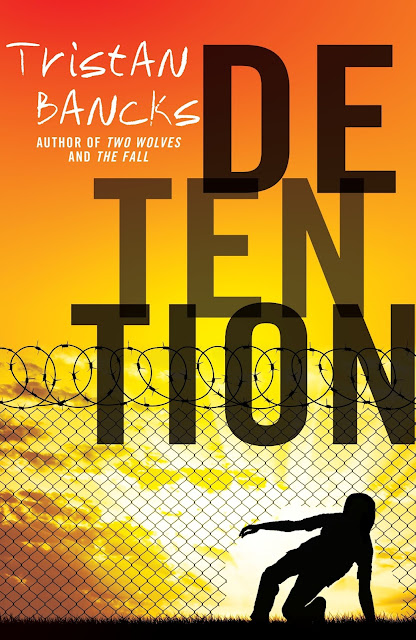 Tristan Bancks signed my copy of Detention with a note hoping it kept me turning pages. This book lived up to that promise and then some. Packed with page-turning tension and relentless drama, this is one middle grade novel that may cause a few kids to miss their dinner call.

Yet despite the raw gritty urgency that suffuses nearly every page and the elevated sense of dread and desperation that keeps your heart in top gear, the pace is never too manic nor too hectic to enjoy the energising mix of edgy excitement and sincere emotion Bancks does so well.

Dan is an inner suburban boy living on the outer perimeters of life. He’s classified as trailer park trash because of his permanent residence at the social-economically deprived Midgenba caravan park. It’s a title that comes with an ineradicable smear of hopeless. Deep down though, Dan’s a good kid, a caring kid. The type of kid who’ll risk his own face to save a vicious dying dog, which he does one day after finding Rosco tied up and abandoned by the freeway.

He conveys the dog to the scrubland adjacent to his primary school, leaving it there until he can return with life giving water and returns to school and his permanent dream of escape.

Sima, an Afghani girl on the outskirts of humanity has just endured a daring escape from the nearby Immigration Transit Accommodation Centre where she has been confined with her family after years of asylum detainment on Christmas Island. She and her family have known little else but how it feels to be on the wrong side of a fence, or political conflict and was looking forward to the promise of refugee status and visas allowing them to remain in Australia. It is a promise that fails them, the system and thousands of others like them, resulting in protest and a quest for liberation.

However the attempt to escape is thwarted and those that do manage to get past the guards are quickly rounded up and herded back to the Centre. Most but not all. Spurred by desperate nerve and fear, Sima reaches the local primary school and takes refuge in one of its shabby toilet blocks. Her suspected presence catapults the school into lockdown.

As the school swelters in the ungodly summer heat and speculation rises faster than mercury in Hell, Dan incredulously convinces his ex-cop teacher to let him venture out to the toilet. It’s a foil he hopes will allow him to get water to Rosco but instead throws him into a moral crisis after he discovers Sima hiding out in the boys’ toilet.

With the Australian Federal Police bearing down on them, Dan is forced to decide between what is right, what is easiest and what is just. It’s a colossal conundrum for a 12-year-old and one he has zero time to analyse. His split-second decision is the catalyst to Sima’s future and as it transpires, the future of thousands of other refugees. Dan discovers that when decisions are made on the fly without the luxury of time or logic, the outcomes depend on following through on those decisions with little else but adrenaline and hope to fuel them

Detention gripping and dramatic. Tension sweats from each page as convincingly as the concern on Dan’s brow.  However, this story is more than just a high octane emotional and physical escape set up of perceived goodies and baddies. It’s an exploration of scruples, societal compassion and the boundaries of humanity that thankfully never crosses over into a political observation. I am grateful for this because by focusing solely on the story of Sima and Dan, kids are better able to draw their own conclusions and question their own reactions, draw on their own empathy reserves to examine what they would do in similar circumstances without bias.

There are a notable number of fences Sima and Dan have to negotiate in Detention. Surprisingly, many are old and flimsy, sad wire-mesh attempts to divide and separate yet are easily overcome with a nugget of determination and a gentle tug. This symbolism raises the questions of the true purpose of fences and, in this case, their effectiveness and relevance in detaining human beings whose soul desire is to run towards a better life. Are fences even needed? Are they a necessity to keep people in for their own good and the good of those on the other side or merely an annoying deterrent preventing the true exchange of compassion and empathy?

In a world that is unlikely to change radically overnight, where conflict is ongoing because discord towards others is a natural human trait, novels like Detention are paramount in helping young minds dissect the multi-layered complexities of asylum and its consequences on their communities.

An excellent conduit for discussions about contemporary Australian history and society that should make a resounding impact in upper primary and lower secondary schools. 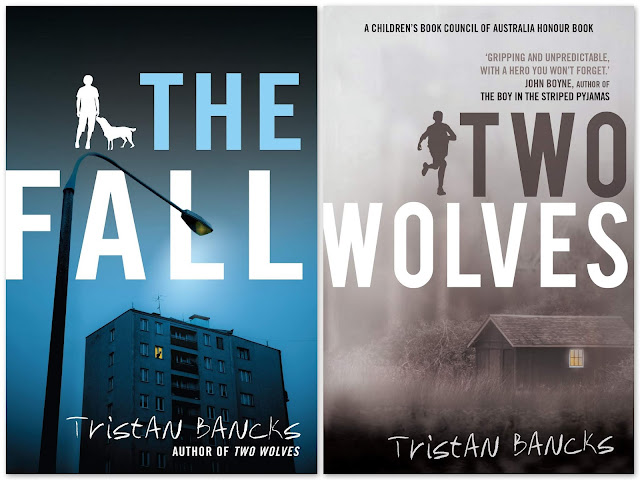 I must mention the subtle continuity Bancks’ publisher has established with the stunning cover design of Detention and its tie in with his previous novels, The Fall and Two Wolves making them wickedly collectible for action-loving tweens and teens.

Norah Colvin said…
That's a compelling review, Dimity. "Detention" sounds like a wonderful read and perfect for stimulating discussions with kids and getting them interested and participating in the world around them.
24 August 2019 at 17:04

DimbutNice said…
Thanks, Norah. Yes, I see it being included on school reading lists and know some TLs are already pushing for this. :-)
24 August 2019 at 20:43