Everything Old is New Again

You might know him or her as Mr Whippy, Super Soft Server, the Ice cream Man. What ever your moniker for these wickedly delightful interruptions to your Sunday afternoon, one thing is for certain; the Mr Whippy Van is a prime example of how the more things change, the more they stay the same.

I remember waiting, barefoot and singleted, at the fence of our front yard in Townsville many dozens of moons ago, for the Mr Whippy van to appear. I'd been listening to the plaintive peel of Greensleeves for what seemed like hours, gradually getting louder and no less doleful as the van crept through suburban streets closer and closer to our front yard. The mere sound of  of the melancholy tune sent the neighbourhood kids into frenzied rapture. Mum. Mum. Dad. HURRY, Mr Whippy is coming. No body wanted to miss out on a soft serve ice cream.

I can't remember if flake bars were around in those days. They might have been. I do recall the sometimes choking exhaust fumes which wafted around the van and the way it gurgled and gasped as though glad for a break as it sat like a fat pink Pied Piper of Hamelin surrounded by excited kids and hot flushed parents. 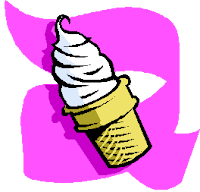 My soft serve never last very long on those steamy tropical afternoons but the memories endured. And now, over four decades later, my own daughter is experiencing the same unremitting joy every Sunday afternoon. Her ability to hear Greensleeves tinkling away (they've sped up the track a bit) in some far off street of our estate is owl like. She thinks the exhaust fumes are a bit stinky, but her reward, a super soft, drippy, sprinkle bedecked ice cream drowned in topping erases all other reasonable thought and is definitely worth lining up on the hot tarmac for.

It's become a bit of a Sunday ritual, already. And while I marvel at the Z Generation's ability to take on every new nuance of their modern world (I spied a picture book about computers, texting on mobiles, laptops etc. the other day) I am quietly thankful that some things don't ever change.

Yes, as writers we need to be alert to today's world and the way in which our readers live in it. But it is refreshing to know that sometimes it really is the most simple of pleasures, be they the saccharine sweet pinkness of the good old Mr Whippy Van or the way a soft serve ice cream melts down your fist, that give us the most enjoyment. And these are most certainly worth writing about too.

The downside to Mr Whippy's regular visits (if there could be a downside to ice cream) is that at today's current rate of exchange and rising cost of sprinkles, we'll be broke by Christmas.

Kat Apel said…
For us, the icecream van was a holiday treat at the beach. It's probably just as well we didn't have one at home. You enjoy all these memories you're feasting on, Dim. :P
8 August 2011 at 13:50

Anonymous said…
The cost is nothing, Its the tune in your head for the 5hrs.

R xx said…
I have been know to ring up the Home Ice cream man on his mobile phone to find out what neighborhood he's delivering in, so I can stalk him for ice cream. Thankfully, he now visits our neighborhood every Thursday fortnight, so my cravings for jelly tip ice cream are satisfied!
8 August 2011 at 18:26

DimbutNice said…
Kat you know just the thought of the pink van fills me with warm fuzzies. Icecreams at the beach...bliss as well. Thanks for sharing the feast Kat.
8 August 2011 at 19:58

DimbutNice said…
Labortory tests must have shown Greensleeves to be the only tune in the world capable of inducing an ice cream head state of frenzy. That and the rind a ding a ling of the Home Ice Cream man's bell, hey Rhana?
8 August 2011 at 20:00

DimbutNice said…
I'm suffering from a bit of brain freeze at the moment so please excuse the inexcusable spelling slips! :-0
8 August 2011 at 20:01