What follows is a recent post of mine some of you may have read in last week's Pass It On e-zine by Jackie Hosking. It attempted to lift the lid on the curly question of 'Do books need a rating?' As predicted this is an absorbing topic for debate, one that I'm probably not fully qualified to adjudicate but am fascinated by. 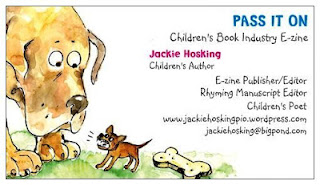 Ben Marshall raised some interesting and salient points in his response (thanks Ben) in this week's PIO issue 415. He argued 'that censoring books is a form of lying'; that young people can in fact enact their own form of censorship merely by closing the book; and that exposure to the warts and all darker bits of life through the written word is a good way to prepare them for if. I tend to agree with him.

From an author's point of view, rigorous and formal censorship would only create another loop through which writers, publishers and agents alike would all have to jump, further frustrating the actual production of a book for the reader. The freedom of speech should be extended to the freedom to choose whatever you wish to read.

However, in the case of younger children (the question was originally put to a panel of children's authors), discretion is still key. Just as one child's choice and direction in religion, culture, even the food which they eat, may be influenced by their environment and their guardians, then presumably, so too will be the reading matter they are initially introduced to. We can not regulate this as an industry and I'm not sure it would be right to do so. As one constantly hears as a parent: you know your child best. I think that this kind of parental regulation is almost inherent and may differ dramatically from family to family. It involves active parenting and that's a good thing. As good as subsequent exposure to 'life'. I'm not saying we should have censorship on books. Far from it. I'm saying, like all things, it should, ideally, start at home. Read on - you decide. It's your choice.


I recently had the privilege to present and participate at the Gold Coast Writers’ Festival.
Attending festivals like this one, showcasing writers, illustrators and publishing styles of every ilk, within a mutually stimulating and inspiring environment, not only enhances ones understanding of the industry; but also opens up a Pandora’s Box of absorbing topics for debate.
First and foremost on my agenda was the panel presented by Gold Coast author, Angela Sunde on Writing for Children.
She quizzed a talented line up of well-known children’s authors including Pam Rushby, Alison Reynolds and Michelle Worthington.  Questions were varied and insightful. Answers were delightfully different from each panellist. Until the last question: Do books need a rating?
This seemingly benign question could easily have filled another 45 minutes discussion.
In the forever metamorphosing environment of book genres, where YA novels can cover every conceivable topic that adult novels do, it would at first make sense to want to try to categorise or rate them to suit reader age and emotional intellect. The model for this was, rating censorship used on movies.
But should written content be treated in the same way as visual content? One young (secondary school aged) audience member thought not. She believed that what we (kids) read is processed very differently to what we view at the movies, on line or via other forms of media. It is ‘more slowly absorbed’ and therefore makes less of a (disturbing) impact. Kids should be allowed to read ad hoc and without restriction. She then returned to her text message.

Michelle Worthington, picture book author, felt differently. She said that as a parent, she had a certain responsibility to monitor what her kids read in the same way she would like to know what they were watching or listening to. A chapter book that presents no problem for one child, could act as a catalyst of discomfort and unease for another.  It is not a matter of wanting to be controlling or banning the book forever, rather a decision based on the current emotional capacity of an individual to cope with what is being imparted at the time.
She said this proactive approach to shared-regulating what her kids were reading allowed for open and honest discussion of story topics, values and emotions; something which every parent should be endeavouring to foster by reading to or with their children at every chance.
She echoed a shared sentiment, that while all texts should be available to all kids to read, the time at which they read them was the important thing, not what those texts contained. Children grow up so fast. Not permitting them access to a meaty YA novel at age 12, even when they are more than capable of physically reading it, may allow them to cherish being 12 for just a bit longer.
I personally, remember every crystallising moment when I first read something new and shocking; my first taste of erotica, my first grisly tale of murder most foul, my first exposure to unrequited love. All these images remain with me to this very day. I don’t think they damaged or upset me unduly in any way. The point is, how can anyone, including parents, ever judge or know the critical moment when a child has inadvertently read something essentially life changing; that may remain with them forever? How do we know what is being remembered, forgotten or laughed off? What are the literary triggers that ignite a child’s memory? And can these triggers be determined by age, lumped into categories and cast off as ratings to be used as reliable guidelines to book choice?
Would trying to do so corrupt the sale of children’s books in an age where we are more and more desperate for kids to read? Would censorship stifle the enjoyment, and adventure of reading?
It is not an easy conundrum to resolve. I look forward tackling this on future discussion panels. Meantime, move gently into the night; preferably with a good book.