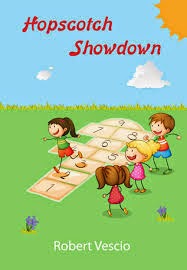 Playground pastimes in those informative primary school years tend to cement some of the most endearing and enduring memories of our time spent in school. These days it’s handball and (insert grimace) looming. I myself was more of a marbles and knucklebones kind of girl and can remember sacrificing lunch to compete in crucial playoffs and tournaments. Ah, the salad days of youth…What a party is was.

Fortunately for me, I still get invited to the odd party and today I am delighted to be part of Robert Vescio’s Launch Party for his new early reader chapter book, Hopscotch Showdown.

Robert Vescio is perhaps best known for his picture books, No Matter Who We’re With and Marlo Can Fly but is a regular contributor to the children’s book scene and multi-competition winner, resulting in an admirable affiliation with Jelli-Beanz Publishing. His original Hopscotch Showdown short story was in the Jelli-Beanz Publishing Packed Lunch Volume 1 anthology for kids in 2011. Kids can now enjoy it as a standalone reader. But now, it’s time to get this party jumping and what better way than with a rousing hopscotch showdown.

Hopscotch Showdown is a springy little tale about two young girls embarking on a fierce battle of patience and precision in order to defend honour and reputation.

Clarity Johnson is the current Blue Hill Primary Hopscotch Champion. Prunella Hinchbottom, the girl who’s quest is to be the best, aims to bounce Clarity off the winner’s podium. Armed with nothing but their markers and quivering thigh muscles, they hop, skip and jump their way into primary-playground history.

Vescio’s occasional play on words, ‘silence reigned heavily although no one got wet’, is happily unbalancing at times and his description of the playoff is sufficiently accurate and enthralling enough to keep young readers on their tiptoes till the climatic end. Who knew hopscotch could be so riveting?

I especially appreciated the way seemingly arch enemies eventually demonstrated good sportsmanship, reminding us all it’s not always about how fast, how high or how many marbles you accrue that counts in the end.

I wish I could say there’s a prize for guessing the exact number of hopping-related puns there are in this blog, but I’m not in charge of the loot bags this time. Maybe someone can tell me what the current GuinnessWorld Record for fasted completed hopscotch is though? Hint: it’s a fair bit quicker than Clarity’s.

Thanks for inviting me along to your ‘hop’ Robert. It’s been a real trip.

Anonymous said…
Thank you for a great review and for being a wonderful host. Enjoy the festivities!! Robert Vescio
7 May 2014 at 21:44