Tweenhood is a terrifically testing time. One I remember of intense scrutiny when everything about you; the way you look, the way you dress and the friends you avoid suddenly becomes big deal. You find yourself navigating that mystical ground twixt ‘little kid’ and ‘fully fledged adolescent’, feeling as though your every move is being examined under some humongous magnifying glass for humiliating broadcast. It’s a time to loosen grip on your childhood beliefs while at the same time search for new vessels of magic in which to float your maturing soul. Complicated concepts at any age, but utterly bewildering at age twelve. Yet Lily Padd, star of Angela Sunde’s inaugural Pond Magic, is about to set sail in another tale of pre-puberty angst to prove to us all that tweenhood really is ‘a snap’. 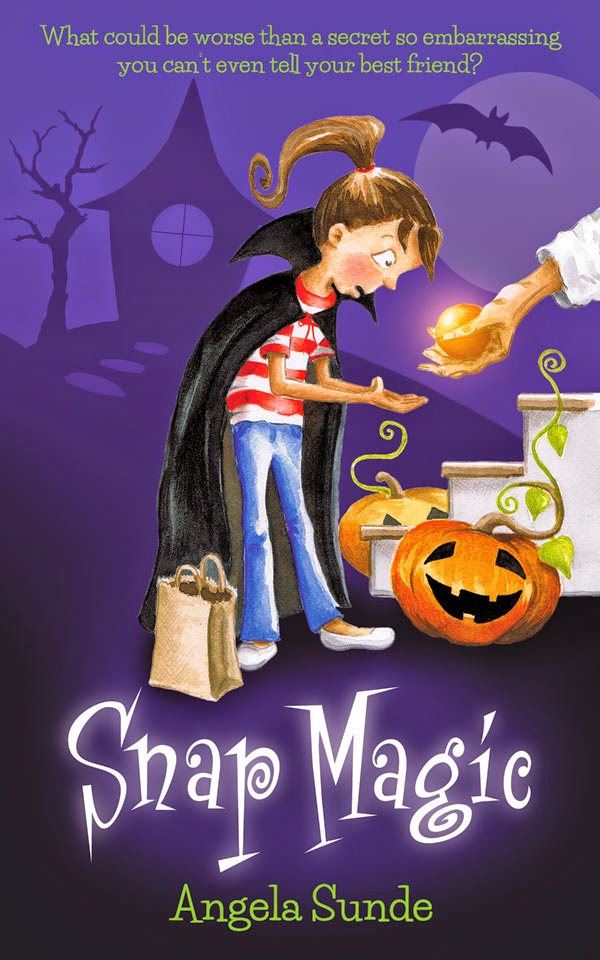 Snap Magic snaps, crackles and fizzes from the moment Lily plunges into the girls’ toilets to escape the painful inflictions of Rick Bastek, a lad with limited like-appeal and tarnished intelligence. Aside from the awful daily avoidance of being ‘snapped’ by Rick, Lily is also at odds with an embarrassing secret of her own which threatens the childhood confidence she shares with her long time bestie, Maureen.

Things slide further down the gurgler when the two girls realise their whispered bathroom exchanges have been overheard by Ellen Middleton, the meanest, prettiest girl in school, who’s so feminine she makes you want ‘to puke’; you know the type.

Lily is distraught beyond words. Ellen threatens to divulge every lurid detail about Lily to the whole school which could easily ruin any hope of snagging a friendship with the staggeringly charming new boy, Storm.

Maureen is convinced witchcraft is to blame again after she notices long black hairs sprouting from her best friend’s face. She might well be right when Lily’s bewitching neighbour, Mrs Swan becomes involved. It isn’t until the eve of the school’s Halloween Dance that Lily realises that if magic can cause such colossal chaos, perhaps it can overcome it too.

Snap Magic is a book young girls and boys will instantly warm to. Angela Sunde has magicked a spellbinding story that showers readers with more sparkling moments of silliness than there are hairs on a yeti’s chin, which by the end of the story, are many.

Lily is a lovably verve-loaded girl with a wry sense of humour whose desire for obscure normality is at conflict with her knowledge of things of a more Wiccan nature. Sunde has crafted a cast of non-obnoxious characters easy to read and laugh along with, my favourite being Maureen; pumpkin-haired, brazen tempered, self-assured and faithful as a puppy.

With gossamer fine references to Cinderella floating throughout, Snap Magic reinvents the twist in twisted fairy tales with frequently funny injections of parody. Nothing escapes Sunde’s wickedly wacky observation of our humble suburban lives: snap and store party plans, frozen bras and spectral pumpkin soup; it’s all there to be snapped up, now.

Snap Magic is the perfect bookshelf companion to Pond Magic yet reading it first will in no way diminish the magic of either.

Follow Angela as she zaps around on her Blog Tour broomstick. Check out the dates and places by clicking on the Snap Banner.

Want to talk to a real witch? I chat with Angela about Snap Magic and casting spells over at Boomerang Books Blog. (OK, so she’s not really a witch but boy can she cackle and looks super fetching in witches’ britches.) 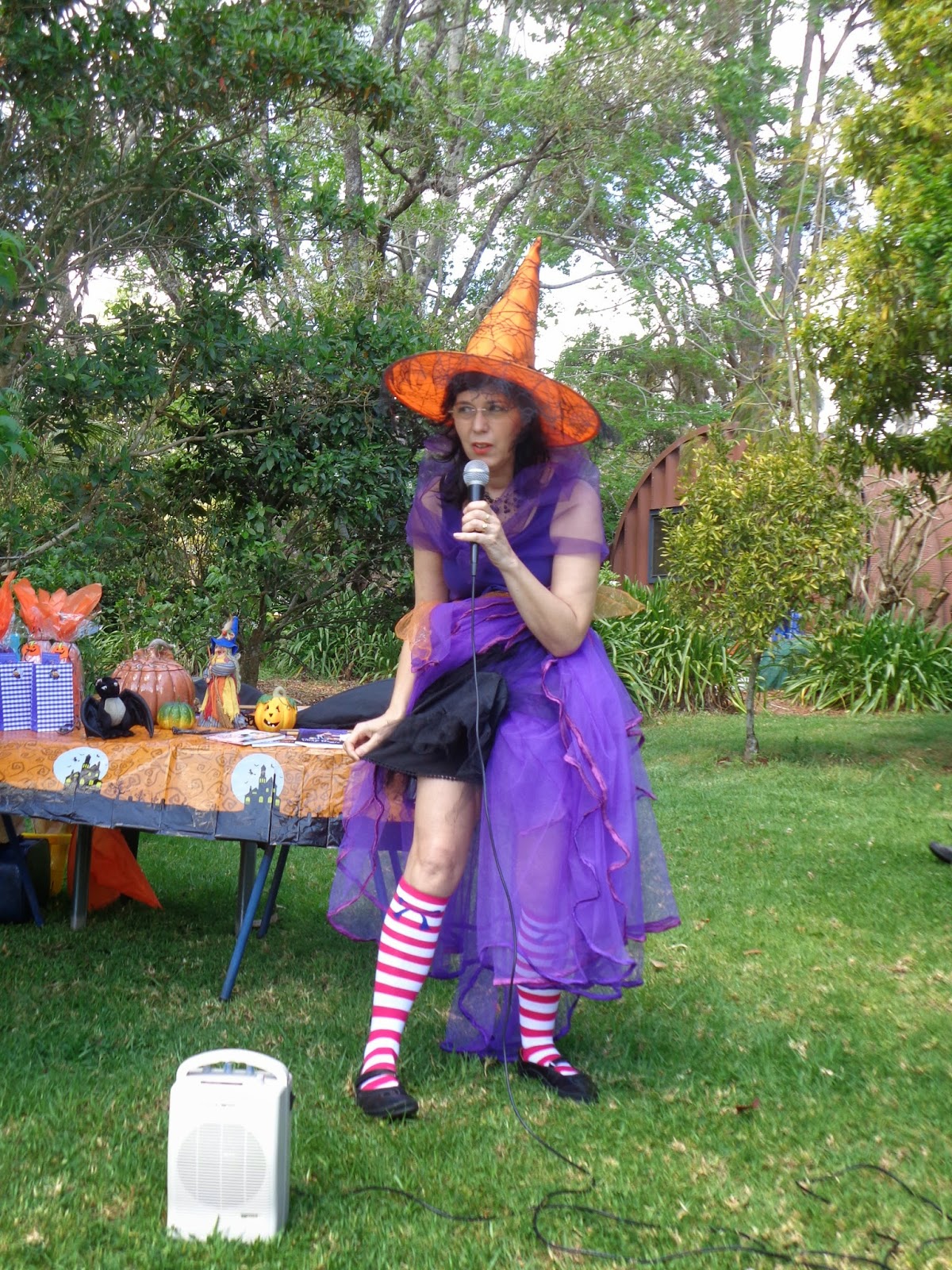 Unknown said…
Angela's new book sounds great and I imagine the launch would have been a lot of fun. Awesome witch costume!
19 October 2014 at 12:55

DimbutNice said…
Hi Rachel - it is and it was! Angela not only has a way with words but with costume coordination too.
19 October 2014 at 20:47

Anonymous said…
Wonderful review and I absolutely love your summing up of teenhood, Dimity. It's spot on and brought back vividly, as did Snap Magic, those painful and so intense feelings of self doubt and peer fear.
Chris
20 October 2014 at 15:32

DimbutNice said…
Thanks for visiting Chris and yes, I think it sums up a phase of life familiar to many of us.
20 October 2014 at 20:19

Angela Sunde. said…
Hi Rachel,
You might enjoy checking out the photos of the launches on my Facebook author page – Angela Sunde Author. I just put them up last night. Loads of fun and great costumes!
22 October 2014 at 08:33

Angela Sunde. said…
Thanks for your kind words, Chris. I think Dimity and I must've attended the same school of tween problems! Ooh, spooky... the captcha for this comment is 666! Can you believe it? YES, true.
22 October 2014 at 08:35

DimbutNice said…
What's even spookier is that I hadn't noticed this captcha requirement before. Hmmm...
22 October 2014 at 09:50

Two Birds on a Wire - Balancing with Heidi Cooper Smith 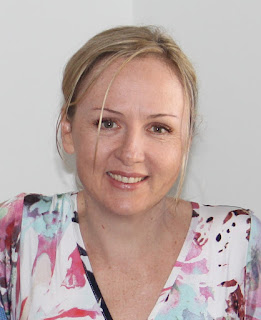 Balancing the extremes of childhood dreams, real-life realities and the myriad of other little collar-jerking moments that prevent you from ever walking a perfectly straight line is no mean feat. You'd be forgiven for feeling a little doo-lackey at times and having a laugh at yourself.  Debut picture book illustrator, Heidi Cooper Smith is someone capable of doing just that so today in celebration of her  launch of Two Birds on a Wire , along with author, Coral Vass , we uncover 5 Fun Facts about Heidi (+ one if you're counting, because I obviously can't. It's why I write.) When I was eleven, I wrote a series of picture books (unpublished!) called ‘Matilda Mouse and the War between the Cats and the Mice” and won a school award for them. I once played bass clarinet in a quartet with my principal, vice principal and senior mistress.   Yes, I was that cool. I have the worst sense of direction of anyone I know and am appallingly messy.   I often end up buying ar
Read more