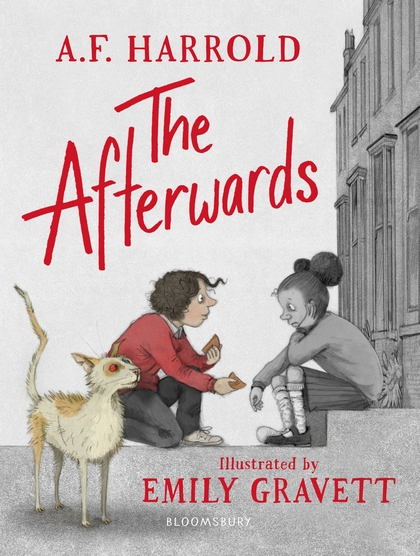 The Afterworld is a sad, colourless place devoid of life’s vital spark. Yet Ember is unperturbed by the Afterworld’s morbidity and although she finds it hard to breathe the air of the soulless, she remains resolute, steadfast in her belief that she can find Ness, which she does, and bring her back, which she tries darn hard to do, because that is simply what best friends do. They never give up.

Sadly, Em’s own uncle, hardened by the loss of his beloved dog, Betty, thwarts Ember’s attempts, upsetting the very clear balance decreed by the Afterworld, a life for a death. Ember is unable to give anything in return for her friend, and is forced to farewell her and admit her bumbled trade now means she too is trapped in the afterwards.

Chilling by degrees, tearful in parts and appreciatively comic throughout, this dark tale presents a side of death that both provokes thought and warms the heart. The loss of a close friend is no less real or disturbing as the loss of a family member. When it is the loss of a young friend, disbelief becomes the overriding emotion. A F Harrold explores this emotion in the most poignant and powerful way. The mortality of all living things is reflected by the time it takes them to ‘turn to dust and blow away’ to the place where they cease to ‘echo’. A snail, which may think very little of itself and is therefore able to forget itself faster, disappears quickly. Humans echo the longest. 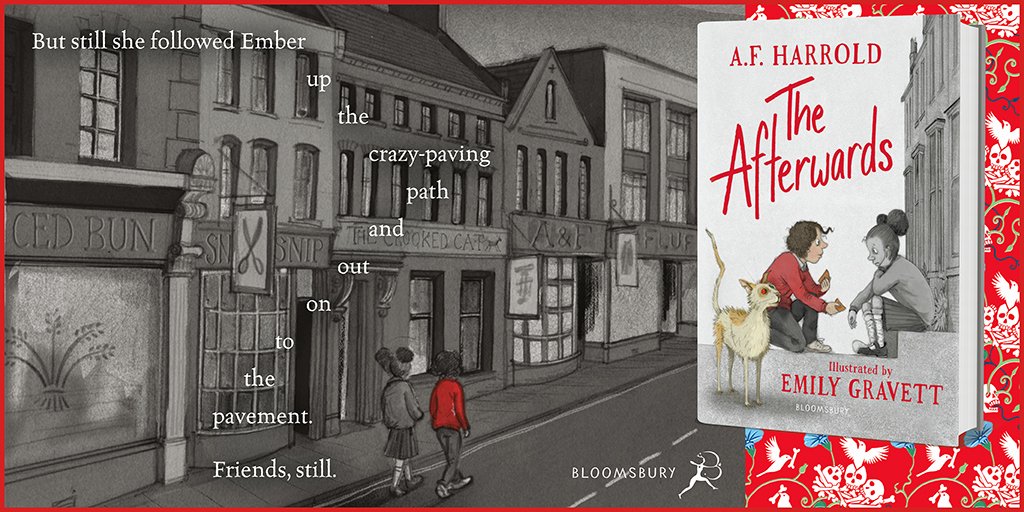 Harrold’s prose ‘tiptoes into the air’, almost as ethereal as his characters’ heartbeats yet it is also persuasive and convincing. Emily Gravett’s stunning illustrations mirror mood and sustain atmosphere while the thoughtful use of swirling typography and contrasting page colour maintains the ghostly intangible tone of the story.

Yes, this is a story about death and one little girl’s attempt to slap it in the face and fight for those she loves. Yes, there are a few half-dead creatures lunging about not least of which is Ember’s mother who would much rather Em stay dead with her than relinquish her back to the land of the living. And yes, the afterlife is a little greyer and gloomier than some of us mere mortals may be expecting (who’s to say it isn’t?) You may find this a little confronting. I did not and do not believe children will because The Afterwards effectively appeals to the unsoiled parts of a child’s imagination where hope energetically resides and possibilities are every day occurrences. Where heroes are dads named Harry and where wanting to be close to your friend forever is the most important thing in the world.

There are many meaningful surprises in The Afterwards. Do not be afraid to experience them.

Norah Colvin said…
Thanks for the review, Dimity. It sounds like it may be interesting. You recommend it highly. I think I'll reserve judgement until I read it for myself.
29 April 2019 at 21:26