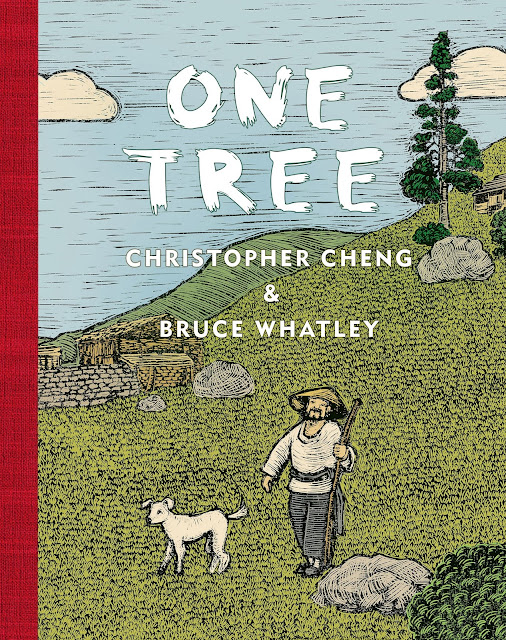 To pre-empt a roundup of nature-friendly children’s books, I thought I’d shine the spot light on One Tree, the latest creation by duo, Christopher Cheng and Bruce Whatley.

The first thing you notice about One Tree is its understated simplicity. There’s a certain duplicity afoot too, for this larger-sized hard cover edition sports a burnished red spine and textured illustration that entices the caress of fingers. However, the spine is not cloth bound as appears and the undulating fields depicted on the front cover are not course to the touch.

This enigmatic ruse continues once you slip inside this story. Text appears mostly on the left-hand side pages, framed pictures on the right, all set against a weathered hazelnut cream background giving the reader as sense of reading something ancient and revered, like a treasured fable. This effective set-up sagely escorts readers through a young boy’s story that begins long before he is born in a mountain village where his grandfather resided in a one-room house that was ‘better than an Emperor’s palace’.

Grandfather’s great affinity with the land and mountain on which he resided and which sustained him is relayed with care and warmth. But that was a long ago time, a memory, a dusty photo on the wall. Grandfather now lives with the boy, his parents and goldfish in a cheerless, noisy, crowded city apartment. Despite the hustle and hubbub of the boy’s city life, his grandfather maintains a reticent silence. This place, devoid of greenspace, is not enough to cheer him and he wallows in a kind of grief that the boy can’t penetrate until one day the boy happens upon a sapling pushing up through a crack in the path. He takes it home thinking it will die. 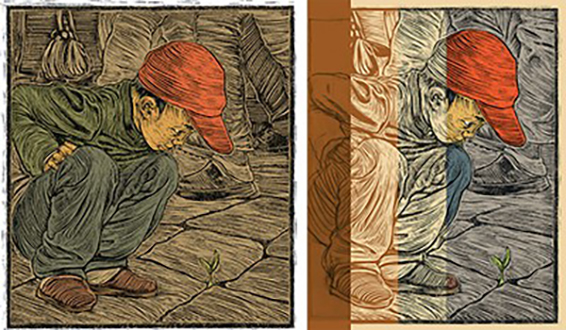 At first his grandfather’s administrations are curt and noncommittal. How can a tree grow in this overcrowded city? But as the boy’s determination to raise his tree grows, so too does his sapling, and his grandfather’s respect; Grandfather’s zest for life is wondrously re-germinated. Soon their balcony is a small forest of green and flowers and birdsong. The transformation is the catalyst for even greater change and as Grandfather spreads the story of the boy’s one tree, hope colours the city’s balconies green.

One Tree reads like a beloved fable; a story that spans generations and could easily slip into despondency yet buoys hope in the most translucent way as Cheng compares the past with the present. Green mountainsides are obscured by city grim and skyscrapers. Individualism is sucked away in a vortex of colourless anonymity and sameness, yet one tiny action motions great change allowing transformation. This story blends environmental concerns with social awareness and family relationships all under a deliciously Asian cultural umbrella. And the thing that pulls it all together? Whatley’s exquisite illustrations. 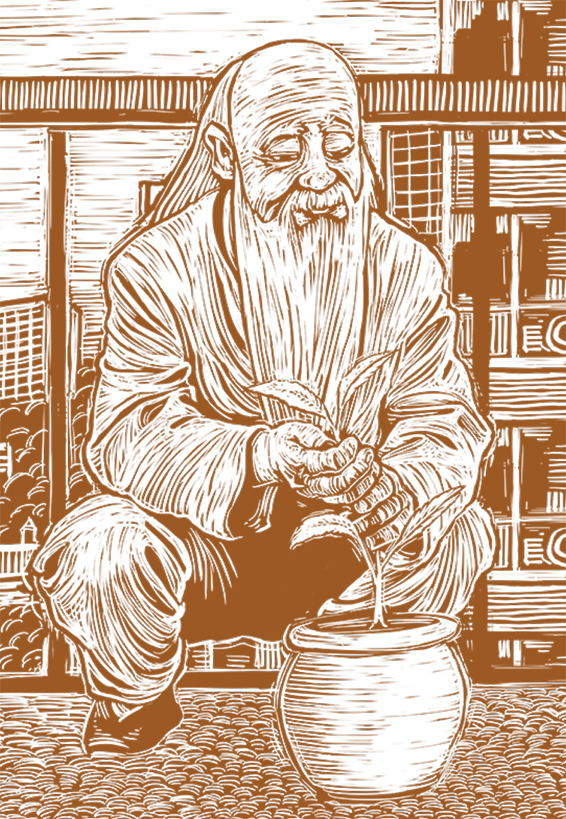 In a recent article on working on One Tree, Whatley stated he, wanted to do something new yet it had to have a traditional feel. I wanted an illustration style that reflected Chinese culture and tradition. Chinese water colours were my starting point. But I knew I would be spending a lot of time away from my drawing board and using a traditional paint technique might not be possible. So I tried to imitate the feel digitally. And failed miserably! I then looked at woodcuts that led me back to the lino cut technique I had been playing around with (digitally). There is in fact nothing traditionally Chinese in the technique I used besides the digital aspect ‘lino’ is very different to wood – but it hints at tradition and felt appropriate.

However these illustrations are derived, the end result is a magnificent ode to Cheng’s mindful tale creating a modern day classic that is pure goodness to share.

Norah Colvin said…
This book looks absolutely delightful, Dimity, and one to treasure. The story is very moving and Bruce Whatley's illustrations seem to capture the exact essence of it. Thank you for sharing your lovely review.
25 June 2019 at 22:11

DimbutNice said…
Always welcome, Norah. Yes I was quite taken by it. The work and consideration these two masters attribute to this story is palpable. Thanks for reading it through. I do recommend this one. :-)
25 June 2019 at 22:37