Review: Secrets of a Schoolyard Millionaire 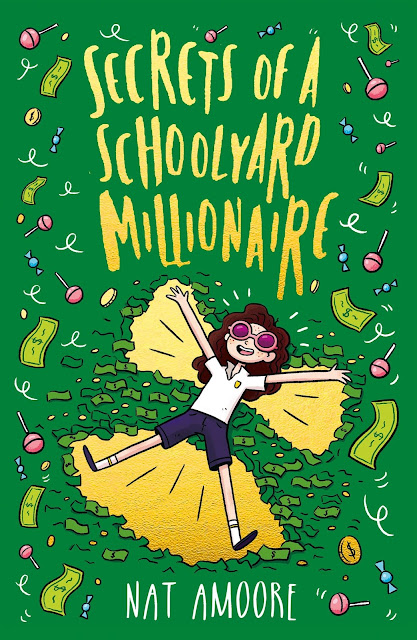 It's a premise that most kids regardless of entrepreneurial motivation will find irresistible, having a zillion (read: million) dollars virtually thrown into their laps to spend with unrestricted abandon and no adult involvement.

This is the princely predicament young Tess finds herself struggling through along with her best mate, Toby. Struggling, because despite their best efforts, spending a gazillion (read: million) dollars as 10-year-olds is not as straightforward as walking into a candy store. It takes more cunning than a weasel and a whole lot of guts especially as said million is the former spoil of her no-good, recently arrested, criminal backyard neighbour.

As Tess and Toby endeavour to right wrongs, distribute funds multifariously and maintain a low profile (which is difficult to uphold thanks to their philanthropic habit of doling out free lollipops and wearing sunglasses indoors - because that's what millionaires do), they encounter more and more moral hurdles and one big hairy scary one - Scotty, the backyard crim - who breaks parole to hunt down his loot. Trouble is, it (read: loot) suddenly disappears and Tess has just hours to find a million bucks, her missing mum, her sister's loyalty and reset her moral compass.

Secrets...is an exciting, edge-of-your-seat, funny-as read that adult lovers of MG fiction will enjoy as much as the intended market thanks to the hilarious tongue in cheek old school references peppered throughout Tess's story. To link the two frames of reference, younger readers are invited by Tess, who is a dead set Gen Z, 21st Century online believer (read: believable 10-year-old) to Google anything unfamiliar.

Tess's story reads as a soft confession of sorts, accompanied by retrospective 'Tips' – the secrets. Among some notable favourites: Tip 15 Don't Be An Idiot. No One Likes An Idiot and Tip 20 – … which you'll have to learn for yourself. All 31 Tips are listed in the back of the book, conveniently making up a comprehensive survival list of life hacks that could support business managers as easily as it could tweens making their way into teenagehood.

Pure brilliance and fun, Secrets of a Schoolyard Millionaire is a triumphant debut by Nat Amoore, worth its weight in bank notes.