Can Eco Rangers Save the World? Wildlife Under the Microscope with Candice Lemon-Scott 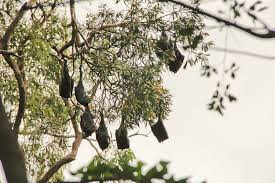 Ever since humans began devising ways to kill cockroaches, odds have not always favoured Earth’s wildlife. Not that many of us regularly regard the indestructible attributes of cockroaches as worth conserving, but our unremitting need to dominate does make it hard for other species to coexist with us on this planet. Couple human habitation with a zillion other influences such as adverse weather conditions, and you have a world of animals struggling to survive.

The humble fruit bat or flying fox is one such mammal I’ve noticed on the brink lately. In as many months, for the first time in nearly 17 years, I’ve noticed dead or dying fruit bats on my regular morning walks. Small, perfectly healthy looking creatures lying still and shrunken, dehydrated and emaciated. They seem to be literally falling out of sky, starving because our native flora on which they depend for food is also in crisis mode, tricked into random flowering times or else unable to flower and fruit at all because of the extreme drought conditions. I spotted this little fellow below literally suspended in death less than two metres from the ground in a Grevillia, too weak to continue his search for food.


Ironically this all occurred as I was reading the latest in Candice Lemon-Scott’s Eco Rangers series, Microbat Mayhem. 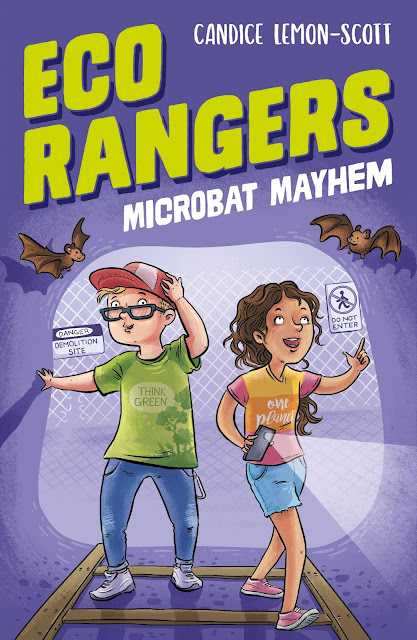 Eco Rangers is a feisty fun-filled series for young primary school readers who love adventure sprinkled with mystery and dollops of conservation. Best friends, Ebony and Jay enjoy a close relationship with the local conservation wildlife centre which is useful because they adore animals and somehow always seem to be at the forefront of a wildlife caring crisis.

In this second book,  a pair of incredibly cute yet compromised mini micro bats need their help. Rescuing the helpless babies from an abandoned theme park ride however is only the beginning of Jay and Ebony’s worries. How are they going to rescue the entire colony before the ride is demolished for good?

Author, Candice Lemon-Scott loves wildlife and animals and has always been surrounded by a range of pets throughout her life, including dogs, cats, rabbits, fish, birds (including a duck) and various lizards. She’s a trained wildlife carer and enjoys writing about the adventures of the young Eco Rangers, Ebony and Jay. I wanted find out more about her motivation behind this environmentally exciting series so invited Candice to talk about some stuff…

What motivated you to pen a story about bats and in particular these little cuties, Microbats?
Microbat Mayhem is very loosely based on a real-life story, where a colony of rare Microbats was found inside a theme park ride that was due for demolition. Thankfully, the colony was safely relocated, but when I heard about it, I couldn’t think of anywhere more exciting to base a wildlife rescue story than at a theme park. The second reason I wanted to write about Microbats is that bats have a bad reputation and I want to help change that. A lot of people are afraid of bats, or they think they’re just disease-carrying pests, when they’re actually super important to the environment because they eat insects like mosquitoes and help fertilise plants and crops. I also really love bats myself, they’re such fascinating animals. Who wouldn’t like to hang upside down and sleep all day?

What do you hope to instill in young readers about wildlife and the environment with your stories?
I first began writing the Eco Rangers stories purely because I love animals and so do my daughters, so it was fun to write about wildlife. As I started writing the books, some five years ago now, the rate at which our wildlife are coming under threat of extinction, and even becoming extinct, started to increase dramatically. This motivated me further to get the books published. I also completed a wildlife carer course, so I became even more aware of the need to look after our wildlife. If we don’t act to look after wildlife and the environment, all these animals will be gone forever. I hope to play a small part in helping educate kids about the importance of caring for and looking after them, but mostly to nurture a love of all animals.


Are there any other animals you’d like to feature in this Eco Rangers series, and why?
There will be a third book in the series coming out in January that features a ringtail possum. I love possums; they’re so cute and feature in a lot of backyard homes. Again, they’re often seen as a pest because they can get into people’s roofs and so on, but they’re another important wildlife animal that needs our love and care. There are so many other animals I’d love to write about though; they’re all special and interesting, and important, in different ways.

There is still so much we can do to help rather than hinder our spectacular wildlife. Exposing youngsters to stories that explore a variety of wildlife, environmental and conservational situations is a great way to start expanding young minds and hopefully equipping them with enough ambition and understanding to cope better with planetary issues.

Look out for the next exciting instalment of Eco Rangers – Wildfire Rescue – due out January 2020.

Candice said…
Thanks so much for having me as part of this super important discussion. I’ve been so sad to see our bats around home dying from starvation too ��!! People can put out an apple kebab strung up in a tree during this time ��
18 November 2019 at 19:41

DimbutNice said…
So true, great idea Candice. And if you have native fruiting and flowering trees, leave some fruit for the bats. Don't fight them for it!
18 November 2019 at 21:25