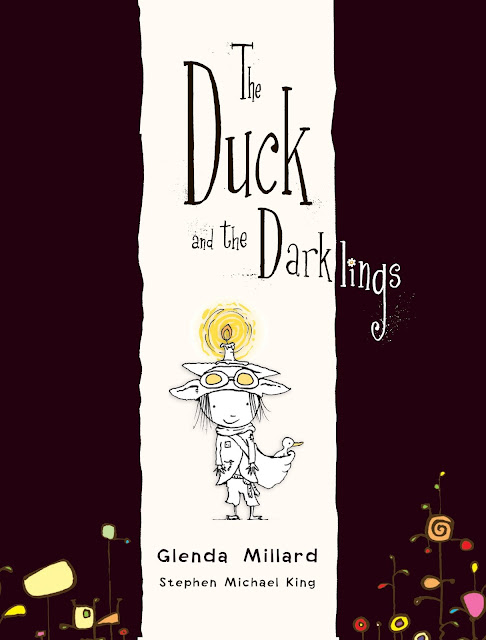 The Duck and the Darklings is less of a blasé five minute read and more of a whimsical journey of despair, discovery, renewal and hope. It opens bleakly in the land of Dark and is about a small child named, Peterboy and his Grandpa, who share everything. Their home, though built with care and lit with love is not a joy-filled place and is populated by others who depressingly are trapped by their own decayed memories.

But buried deep within Grandpa are scraps of wonderfulness and symphonies of stories past; tinder that Peterboy hopes to ignite and so rekindle the fire in his Grandfather’s eyes. He searches the finding fields for something to make Grandpa’s inner light burn bright again but instead finds a wounded duck and takes her home.

Grandpa reluctantly repairs Idaduck and fosters a forbidden fondness for her. But, just as Grandpa warned, it isn’t long before Idaduck gets the urge to be gone on the wind.

Peterboy is determined to make Idaduck’s departure memorable and seconds the Darkling children and Grandpa to help him light Idaduck’s way. It is a farewell and dawn that will never be disremembered in the land of Dark.

This picture book sent a tremor through nearly every one of my heartstrings. As I navigated my way through Peterboy’s and Idaduck’s story for the first time, it felt that Glenda Millard was deliberately tailoring each piece of prose for Stephen Michael King to work his illustrative genius on. Turns out, that was the case.

Millard delivers unforgettable word images and unique turns of phrase that defy banality and fill every page with pure poetry. Sorry drops; rusty latch key of his magnificent remembery; crumbs and crusts of comfort; and speckled surprises are just a few of my favourites amongst many of the fine examples of Millard’s exemplary way with words.

The Duck and the Darklings appears something of a departure from the norm for Stephan Michael King at first as well. A noticeable lack of colour, definition and tea pots marks the first two thirds of his illustrations. Splats, smears and stains define the imperfectness and soulnessness of the land of Dark. The world Peterboy inhabits, bereft of light and cheer and hope, reminded me of the slum cities of some third world countries and of the dark depths of one’s own despair.

But gradually, almost imperceptibly, the landscape lightens as we eventually rise from the dark of night, and the bruised wounds man had made with his indifference, heal. A new day dawns, happily, in true trademark Stephen Michael King style.

The Duck and the Darklings is indeed a little bit strange, a little bit dark and a little bit different. It is also a lot of wonderful. Beneath an opaque veil of futility and the poignant reality of the inevitability of life, glows an inextinguishable brilliance.

Millard and King reassure us that even though physically all may be lost, deep down inside, hope beats. It hangs on like life itself and can be strengthened and restored to full splendour; quack, waddle and wing. Truly inspirational.

Share this triumphant story with children 5 years and beyond and any adult who’ll listen.