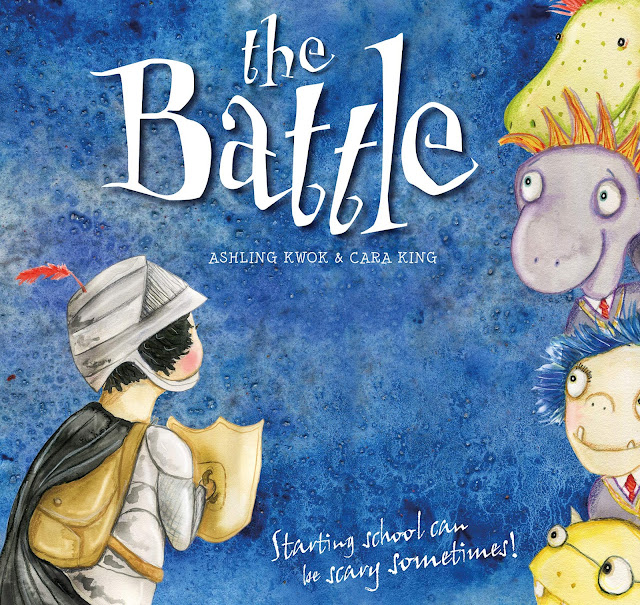 Edward's battle has begun. He's apprehensive and concerned how the day will unfold so he dons his sturdy suit of armour and helmet and hopes for the best. And although Edward is fond of hunting dragons and chasing ogres in his spare time, he is careful to sit in the back row of knights' school lest he bothers all the other creatures.

The king of knight school generously dispenses kindness and understanding but Edward is wary of the attention so ducks and weaves his way into obscurity, to the furthest side of the playground. It's hard though; there are giants, ogres and dragons everywhere! Despite his best efforts, he is approached by a grinning ogre at lunchtime. She proffers cake...with sprinkles. Is it a trick? He decides to ignore his knight training and accepts her gift. But just as the cracks in his amour begin to widen, in troop the dragons.

The first day of school or even returning to school after a long period of absence just as many children are currently experiencing, can be an event of extreme anxiety. Edward likens this trauma to attending knight school; a place that intrigues and beckons but simultaneously overwhelms and threatens his sense of ease. His metaphorical armour is an attempt to keep the overbearing demons and dragons at bay. If he believes in it hard enough, he is sure it will keep him safe. Yet some of the dragons are relentless so in the end, Edward has no choice but to run from them. Trouble is, his armour always trips him up. Might he be better off without it?

The Battle is a sensitive, shrewd examination of a child's ability to fight anxiety with emotional deception. They rationalise that if their guard is strong enough, all will be well but of course this excludes them from facing the root of their fears and enjoying life's experiences for what they really are. Fortunately for Edward, the insistent dragons force him to finally see that they are just like him...or perhaps that he is really like them.

This gentle introduction to perception and swapping anxieties for acceptance is charmingly illustrated by Cara King in water colours that inject just the right amounts of emotion when needed. The rosy apples of Edward's cheeks along with his chestnut brown eyes are beautiful indicators of his feelings as he progresses through his first day; initially registering ordeal, then uncertainty and relief and then eventually, joy.

The Battle is an ideal picture book for those embarking on a new experience, especially those with starting-school-struggles.

Norah Colvin said…
I like the message of this book and it's release is perfectly timed as children head back to school with all the additional anxieties brought on by the pandemic. Armour may seem appropriate as we sanitise and keep our distance.
4 June 2020 at 19:43

Emotional armour and its relevance as a coping mechanism is important to recognise, especially in times like these.
4 June 2020 at 21:19