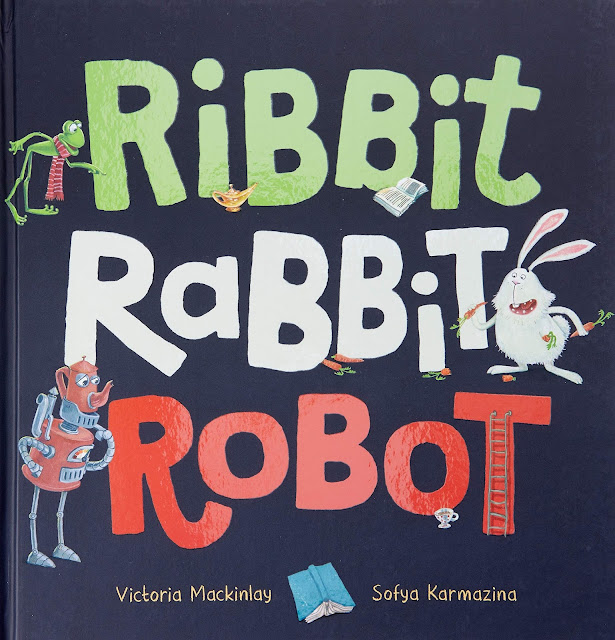 This is one of those picture books that is few on words but big on interpretation and thus possesses that wonderful read-again-and-again magic. Simple and seemingly unstructured, Ribbit Rabbit Robot is really a lesson in paying attention to the minutiae that make up our lives for when we do, magic is often revealed.

One day while hanging out in a fantastically congested shop of curious antiquities, three friends, Rabbit, Robot and Frog, happen upon an enchanted lamp. It's clever frog who rubs the lamp releasing a wish-granting genie of mythical proportions. The genie comes with a caveat that Rabbit and Robot overlook in their wishing-make zeal. They each conjure up companions suited to their desires but as they bicker for possession of the lamp, Frog, who has taken the time to read further, admonishes their greed and selfishness.

Rabbit and Robot employ stealth and subterfuge in an effort to second the lamp for themselves. Hot-headed robot appears to have outwitted his rivals having whisked the lamp into outer space on his wished-up rocket ship. But will he truly be able to retain this treasure if he is unable to stymie his inability to share?

Children are carried along on a dizzying ride of ridiculousness and wild joy that invites them to question who really deserves the lamp the most. Is friendship worth risking for greed? And should we be careful for what we wish for?

Mackinaly's debut picture book is a riot of wonderful. Her quirky narrative allows Sofya Karmazina's expressive illustrations to sparkle as brilliantly as any genie's lamp and promises a lot more fun to boot!

DimbutNice said…
It actually was, Norah but also much deeper in meaning than a first sweep through suggests. Recommend it for the fun and artwork, too. :-)
10 June 2020 at 21:28