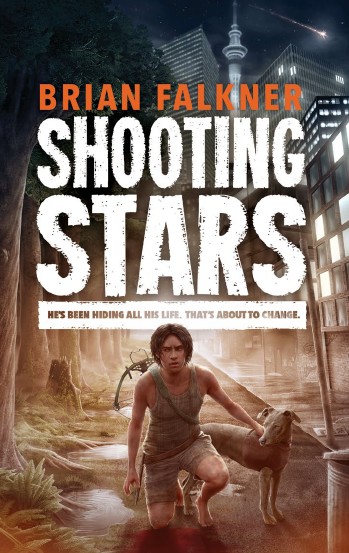 Most modern epistolary novels for tweens and teens veer towards a collection of email exchanges or even sms text messages to relay story plot and character reaction. Shooting Stars is a refreshing step back into genuine epistolary storytelling through the use of diary entries with one remarkable point of difference; our main character has never met another person his age, in his entire life.

Egan Tucker is fifteen. He is a teenager of rugged burly appearance, can smell danger (literally) from a mile away and can slaughter and butcher a wild boar in less time than than it takes to fry bacon. Egan likes to dance in the rain - naked. He moves without shoes and his best mate is a dog, named Jack who'll bite your arm off if you mess with his toy bunny. Their's is a wild, carefree existence, deep in the heart of a tiny bush valley hidden from civilization. No TV. No internet. No other human interaction...except for Moma, Egan's fearless and indomitable mother.

Through Egan's daily diary entries, we gain a visual idea of where he lives and ultimately why he is there. Egan loves to write. Diary entries are dispersed with wistful wish lists, illustrations, maps and, thanks to his mother's supply of library books for him to read and learn from, stories. Stories that tell of a past Egan is too young to recall and a future he hopes to discover when he one day leaves the forest for the 'outside world'.

Egan's stories are wholesome and sincere yet assume the tone and direction of the writers he reads and admires; Ernst Hemingway, Steinbeck for instance. His whole existence is influenced by his immediate surroundings, the weather, the wildlife, his mother and his approximation of the world from his books. Oddly, it's the utopia-type existence we 'outsiders' often aspire to and promise ourselves will make us better humans; refuse, reuse, recycle, have less to live more kind of thing. Yet there is a very real sinister reason Egan's mother has hidden him away in the woods for all these years and she refuses to relinquish their safe hold until he reaches adulthood.

Egan's diarized descriptions of his day to day life begin in short pragmatic bursts but being his own worst critic, soon spill into more detailed accounts of his feelings and reflections. We begin to connect glimpses of his past with a kind of dread about his future. I mean, leaving Nirvana for the chaos of civilization can't be a wise life choice, can it? Seems Egan is about to find out, a little sooner than he and his Moma had hoped.

Shooting Stars is a sensitively curated collection of snapshots that hum with the sort of high-wire tension that makes you forget to exhale, all brilliantly pieced together to ultimately reveal Egan's bigger picture. The fact that we the readers, see it just pages before Egan does only augments the suspense. Secreted between the lines of Egan's personal and fictional tales are dozens of uglier issues that grab readers by the throat; domestic abuse, homelessness, societal disparities to name a few.

Yet it is not all bleakness and gloom. Egan's natural voice zings with humour and guileless naivete. His self-assurance, tenacity and even vulnerabilities galvanize our own emotional resilience. But perhaps his most affecting characteristic is his unyielding refusal to ignore his moma's Code of Honour; a humble collection of 31 inspiring how-to-live-your-life right codes that harness the essence of humanity and how to best survive it. These maxims are scattered throughout Egan's entries as emotional reminders and salves for when times toughen beyond bruising point. They may not be earth-shatteringly new but what makes any principal more powerful - unbreakable - is when it is believed. Egan believes in these codes and his life with his heart and soul which makes him nothing short of angelic, the sort of person you wish you had more time to get to know better.

Shooting Stars is a young adult experience that younger teens and mature tweens will also find engrossing. It's a thrilling odyssey from wilderness to (New Zealand) city streets which is at once familiar and disturbingly alien. It's a study of the human character and what it looks like from behind a number of faces, a story that both haunts and charms. A must read.