Review: The Man In The Water 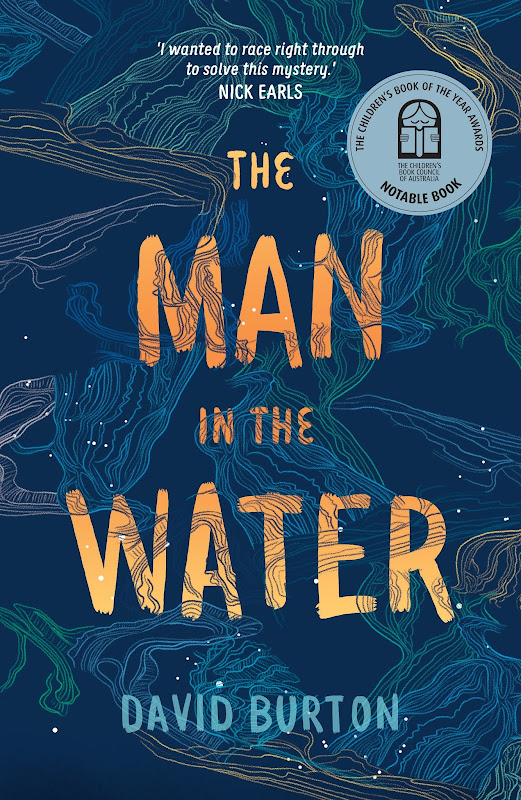 As opening lines go, this one has a doozy. So the premise is; young reclusive teen, never the class favourite, sees a dead man in the local lake. Or does he?
We are left hanging on that particular ledge but not for long. Burton's direct narrative and crisp style soon acquaints readers with 15 year-old Shaun's mining town home, his dust-covered school and the people who matter most to him: his best mate Will, the girl he's sweet on, Megan and his over-worked widowed mother. There's one person whose presence, like the undercurrent of a riptide is never seen but keenly felt, and ripples throughout this tale adding a delicious air of tragic mystery and meaning,well two if you also count the man in the water.
Shaun is a awkward teen with no clear ambition other than to shake the grief and confusion of losing a parent that has settled on him. He is part of his school's celebrated debating team but knows that if it weren't for Megan's adroitness and Will's wit, his contributions would be pretty meaningless. He longs for super hero recognition but would settle for just regular hero recognition, regularly playing out these possible outcomes as mini movies in his head. The sighting of the dead man prompts a whole new set of scripts which Shaun is eager to enact and despite a tendency to bolt at the first sign of failure, Shaun does the decent thing and immediately finding the body in the lake, runs to report it to the police. Unfortunately upon returning to the lake, the body is gone which sets a small tsunami of doubt and disbelief coursing through town.

Have Shaun's ghosts returned to haunt him? His mother thinks so and is anxious to get him 'help'. As if a teen couldn't feel more alone and alienated, Shaun now has to deal with the belief that even his own mother thinks his crazy. But the need to solve the mystery of the disappearing body, even after they learn of the man's identity, intensifies and together with Will, Shaun embarks on a series of progressively over zealous acts in search of the answers and a kind of internal solace.

The Man In The Water is a highly charged crime mystery full of sweet twists, minor aggravated violence and mental fragility. The twists are difficult to spot and plausible. The violence is well contained, shown through Shaun's simmering emotions as much as through anything physical. The author magnifies the limitations and benefits of living in a remote township whose whole existence depends on the mining company who created it. This story accents the emotional stress placed on a small town community when livelihoods are threatened by inexorable change, in this case the introduction of FIFO workers taking over the townsfolk's jobs and the spill over effect that sort of change has on those in that community when greed and desperation grow stronger than reason.

Essentially this is a tale about loss. About losing control and the capacity to cope. No longer being able to remain afloat is a feeling teenagers are well acquainted with but like the man in the water, can affect any of us at any time. Shaun's world is a magnificent outback vastness that is incongruously suffocating, yet understanding and acceptance eventually dawn bright thanks to true mates and a sure heart making this a moving and poignant experience.
Title: The Man In The Water
Author: David Burton
Publisher: UQP, $19.95
Publication Date: October 2019
Format: Paperback
ISBN: 9780702262524
For ages: 14+
Type: Young Adult Novel

Norah Colvin said…
What an intriguing story, Dimity. Your review ignites my interest. Thank you.
21 September 2020 at 20:39

DimbutNice said…
I was utterly intrigued myself by the blurb and first line, Norah. This warrants reading. Great topic choice for a mystery type read for this age group, too.
21 September 2020 at 21:16

Sheryl Gwyther said…
I agree with Norah, Dimity! Love your reviews. I usually end up thinking I must read that book!! And tgis ids another one. Well done. 💜
22 September 2020 at 14:07

DimbutNice said…
Ha ha ha, so pleased to hear that, Sheryl. It means a lot to me to know that a humble opinion can ignite another's curiosity enough to experienced something (great) which may otherwise have been overlooked. Thank you. Dim x
22 September 2020 at 14:28