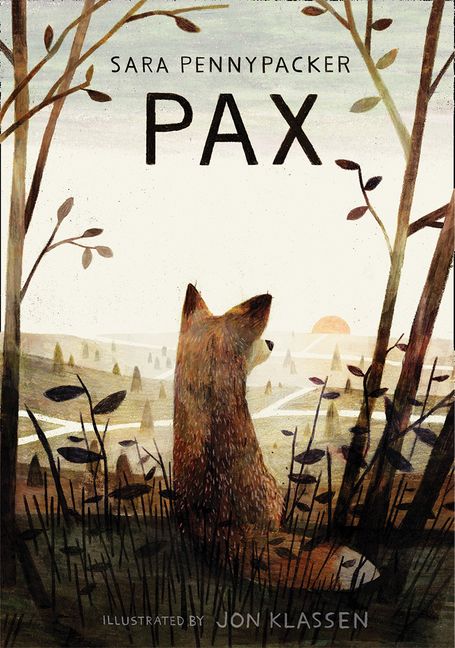 ‘What does the fox say?” Well, in the case of Pax, the red fox, it’s more about what he feels, thinks, smells and reacts to that relays his emotions in such a tangible way, you’d swear you understand fox language. That is one of the most magical things about Sara Pennypacker’s, Pax, along with the charming splatters of illustration throughout by Jon Klassen.

Peter is a young boy on the cusp of teenage-hood living alone with his father only he is not quite alone. His closest companion is Pax, a young fox he rescued as a kit. They share a relationship closer than the traditional boy / dog connection that endures the occasional dissent of Peter’s father. Virtually inseparable, Pax enjoys a solace and calm in his human boy’s world that engulfs Peter’s heart just as securely. It’s a bond seemingly unbreakable but is dramatically tested one day when Peter’s father enlists and is summoned to war.

This story begins with Pax’s jettison from Peter’s car and … his life after his father insists it is time to return the fox to the wild, never mind that Pax is completely unaccustomed to life beyond his pen and Peter’s room. It’s an opening scene that is both distressing and poignant; two great companions torn from each other, one more ignorant of the situation than the other, the other unable to give neither comfort nor explanation for his actions. Yet despite this tragedy-tainted introduction, Pennypacker’s elegant and poetic prose through which she shares every nuance of Pax’s reactions is reassuring and pure comfort to curl up with.

Pax’s reaction to his abandonment is simply to wait it out. He reasons Peter loves him and will return. This simplistic and realistic interpretation of his situation is characteristic of an animal principally ruled by instinct and logic even if that animal has been raised by a species other than its own. So Pax waits. But Peter is a long time coming and in the days that pass, Pax meets other foxes and encounters shocking situations that discolours the way he has always viewed humans.

Meantime, Peter makes a valiant decision to leave the charge of his grandfather and set out alone in search of his fox. His journey introduces him to an ex-veteran of combat, a reclusive woman living on the outskirts of civilisation. They form a tumultuous yet respect-filled friendship that helps hone the message of the futility of war and the power of self-belief. These themes, embedded with the importance of being true to yourself, and the different faces of loyalty are shown through a variety of viewpoints: the foxes’, the solider to his post, a son's fidelity, and our faith in humanity.

Pax is more than a story about a boy and a fox desperately trying to reunite. It is not just a commentary about the unacceptable horror of war or how awful humans can be either, although these issues direct the majority of the narrative. Pax is in essence, an uplifting love story about finding, losing and letting go that is told with tear-jerking tenderness and great empathy.

DimbutNice said…
Ha ha, I feel guilty for forever lengthening that list of yours, Norah! Sorry, not sorry for this is a truly beautiful book that I treasured reading. Enjoy!
7 December 2020 at 21:28