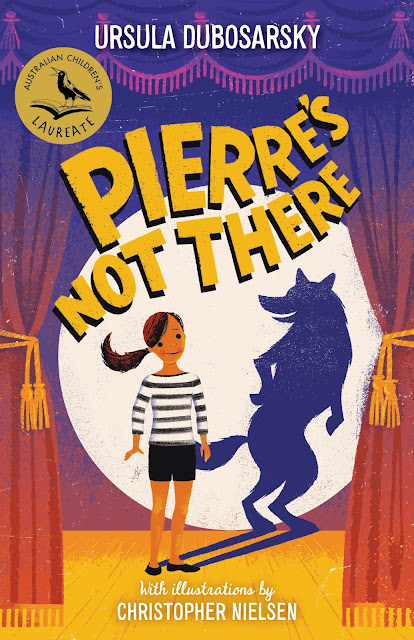 Australian Children’s Laureate for 2020 / 2021, Ursula Dubosarsky, has penned another absorbing junior fiction tale that embraces imagination and compassion. Dubosarsky’s work is generally infused with wonderment and just enough magical conjecture to keep young minds guessing. Pierre’s Not There is no exception.

Fast paced and alluring, Pierre’s Not There begins in a harbour side suburb of Sydney. While Lara’s mother is tasked with cleaning the house, Lara explores the grounds and meets a beguiling little lad named, Pierre. His odd dress and exuberant manner does not dissuade Lara from befriending him especially after he reveals his strange and terrible story to her about his family who were eaten by wolves!

Lara is intrigued and moved to help this boy seemingly all alone in the world who proclaims he must find his grandmother. But how? Pierre convinces her to join him in his quest the only way he knows how to, via a beautiful antique puppet theatre. If she agrees to participate in the puppet show, perhaps the both of them will find the way for Pierre.

The allure of a puppet play is all consuming for Lara who is usually relegated to waiting on her mother for company. With little prompting, Lara chooses her puppet character and is immediately transported into Pierre’s story; the story of a lost boy searching for his family.

Incredibly, Lara transforms into the part she is playing; the dog which she staunchly proclaims she is – not a wolf, as she is viewed by nearly everyone else. As Lara and Pierre move through their new world, they encounter disreputable characters and new alliances. It is not always easy convincing strangers that Lara is who she says she is; appearances can mislead and instil fear and prejudice. But she and Pierre persevere, temporarily diverting their adventures to assist a young princess rescue her father from a slumberous ailment.

Their quest takes place over the course of several scenes, written as a theatre script and enacted with all the drama and hijinks of an actual puppet show. However, even after the final curtain falls, Pierre and Lara are not completely out of the woods both figuratively and virtually speaking.

Eventually, Pierre is reunited with his grandmother but the story doesn’t quite end there…or does it? Pierre’s Not There is an intriguing tale that readers of different ages and fields of reference will gain from. Suggestions of magic intermingle with history and our spiritual connections with the past and those who lived it. This story is told through a few different points of view including that of the audience members who are essentially viewing the play as it unfolds. This again will appeal to different children in different ways; some as the only child, some lonely, some grieving, others open to the world of fantasy in order to soothe and explain away anxieties.

Norah Colvin said…
Sounds like a very original concept with a fascinating and captivating storyline.
4 November 2020 at 21:09