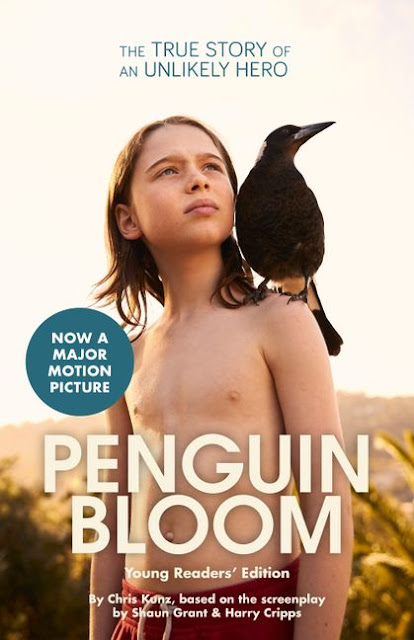 Five years ago an incredible book emerged about an odd little bird who saved a family; the Bloom family, who endured a horrific tragedy and learnt to live with pain and disappointment, heartache and renewed love thanks to an angel clothed in black and white. Penguin Bloom (HarperCollins 2016) was an instant success resulting in the production of a major motion picture still showing on the big screen. This Young Readers’ Edition is the movie-tie in and every bit an emotional heart tug as its parent editions.

Samantha Bloom was a young energetic vivacious mother of three committed to life and adventure when she had a harrowing near death accident whilst on holiday with her family in Thailand. Her subsequent paralysation left her broken and wheelchair bound and in terrible mental decline. This was not the life she had planned. She was no longer the woman she thought she’d be. Her sons and husband, helpless bystanders in this tragedy felt every bit of her pain and despair but were unable to break through Sam’s wall of wretchedness. That is until one stormy afternoon when her eldest son, Noah happened across an injured motherless magpie chick. The bird’s pitiful mews broke Noah’s heart so he nursed it home, rescuing it from certain death.

He, his brothers and father instantly warmed to the curious chick’s wily ways, naming her, Penguin. But Sam was less accommodating and demanded Penguin remain outside, away from her thus establishing the unique landscape through which she would have to traverse of denying, owning and eventually overcoming her deep grief.

Penguin Bloom is told through the eyes and heart of young Noah. His account is both pure and candid. He gives just enough backstory for the reader to feel an acute affinity for the Bloom family and develop an even closer attachment to Penguin whose serene countenance is beautifully balanced by her cheek. Noah’s tween-aged way of relaying his mother’s struggle to come to terms with her new life is both painfully raw yet laced with grin-worthy candour. Magpie antics are comical at the best of times but Penguin’s beguiling behaviours not only entertain, they temper some pretty tense situations. Younger readers will enjoy the tender playful tones while older ones, like me, will be reaching for the tissues. You’ve been warned; tears will be jerked! 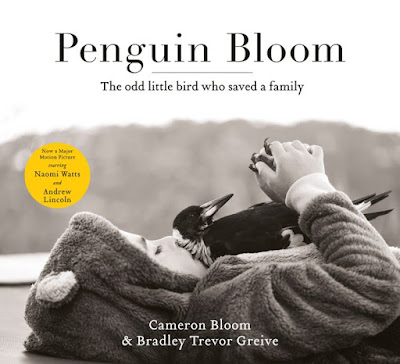 Through her insistent presence and need to be cared for, Penguin gradually insinuates herself irrevocably into Sam’s heart. She is with Sam all day, every day, listening, perceiving, being. This finally gives Sam pause for thought and most spectacularly, reason to live. Most heroes can fly and eventually, this little black and white marvel does too which launches the next chapter of Sam’s recovery.

Penguin Bloom is a story of intense and unfathomable pain. It drips with despair but is buoyed by ordinary, everyday humour. The Blooms could be your next door neighbours yet their story is incredibly unique more so because it is real. This story does several things. It exemplifies the extreme power of will. It presents love as the cause of great pain but even greater healing. And it showcases the deeply visceral connections that can develop between humans and animals.

I love how the intelligence and profoundly intuitive nature of magpies is reflected through this very special magpie. I wish we had access to a Penguin of our own and I hope this book serves to enlighten young readers not only in the arenas of empathy, disability, family loyalty and tenacity but also the adorable winsomeness of magpies.

For those who want to explore Sam’s story further from her point of view try, Sam Bloom: Heartache and Birdsong (Harper Collins September 2020).

Norah Colvin said…
I haven't as yet read the book or watched the movie but both are high on my list. I hope I get to do both or one soon. It's good to know there's a version for younger people to read too.
10 March 2021 at 19:57

DimbutNice said…
Oh gosh you must, Norah!! I'd take a pocketful of tissues if going the the cinemas though...and dark glasses...It is truly a beautiful sobfest but so heartwarming.
10 March 2021 at 20:49