Review: What Do You Do With An Idea? 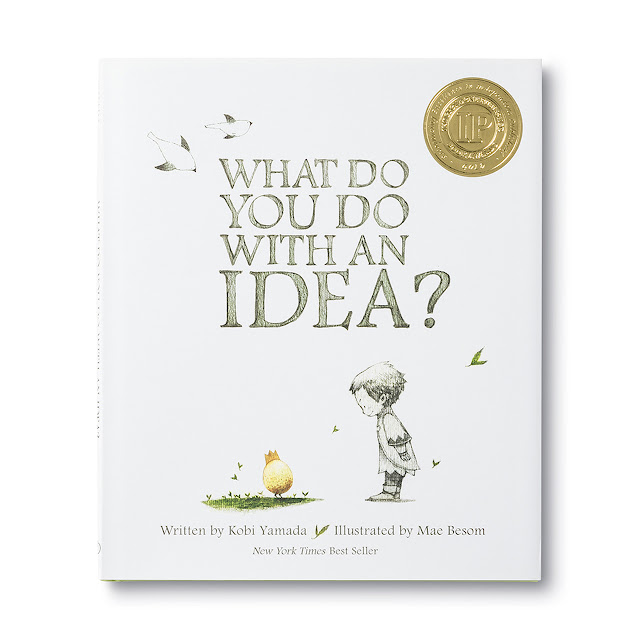 Since last year, I have been invited to present specialised language programs for gifted and talented school students throughout Australia for the G.A.T.EWAYS Education organisation. It’s always a privilege standing in front of a group of motivated young students no matter who they are. The G.A.T.EWAYS kids are especially challenging for they love to question. Fortunately I love to find answers; to questions like: ‘Where did that idea come from?’ and ‘How to you grow an idea?’

My latest workshops cover these precise quandaries focusing on what ideas become…why marvellous stories of course! Stories themselves illustrate this point best which is why I was delighted beyond words to unearth this gem, What Do You Do With An Idea? by the quietly brilliant award winning, Kobi Yamada and Mae Besom.

This book embraces the notion that everything, every single thing, you see and experience around you was once an idea; a huge concept that Yamada breaks down into an absorbing narrative starring a humble idea and the little boy who discovers it.

At first the boy is incredulous. Where did his idea come from? Why is it here? And most exasperating, what should he do with it? He tries to ignore but it clings to him as he trundles along in life refusing to remain at a sensible distance. It demands food, playtime and most of all wants the boy’s attention, a lot of attention.

Over time, the idea grows in stature and presence. It also grows closer to the boy until a complicated friendship is forged. The boy wants to share his idea but is afraid of the adverse reactions of others. He is wounded by their rejections and cynisism but realises that their opinions are just small thoughts that ultimately mean nothing; what do they really know? It is he who knows his idea best. He, who has nurtured it, nourished it and entertained it so he turns his back on the detractors and vows to protect his idea. Not only does he work with it, play with it and care for it, he gives it all his attention until his love for it is all encompassing.

His idea encourages him to think big and walk taller until he couldn’t imagine a world without it and then one day something miraculous happens and the boy realises exactly what it is you do with an idea.

This is the kind of book that produces goose bumps as you read it. I shared it with my students and the response was an electrifying silence as they listened enraptured by the text, mesmerised by the soothing illustrations. To begin with, Besom’s artwork is a harmonious surging sea of sepia browns and greys as the boy initially strives to distance himself from his idea. Flecks of green suggest a tenuous bond between the two that might grow. The idea itself is portrayed as a small golden egg akin to the symbolic metaphor of a seed that I inadvertently used in my sessions; something capable of great change and growth, of initiating transformation. As their relationship evolves, so too does the colour palette. Golds and aquas seep into the images alternatively bringing warmth and hope until the final glorious burst of colour explodes across the pages and through the boy’s transformed world.

What Do You Do With An Idea? is one of the several titles Yamada has penned with an existential transcendental verve making it appealing to a wide audience, not just kids but also adults and kids of higher thinking. It gives one the sense that it is speaking directly to you, whether you are on the spectrum or simple experiencing a little creative self-doubt. It is whimsy firmly anchored by self-realisation and a beguiling positivity that makes your heart burst with wonder and divine joy. It’s pure magic that leaves the next step up to you. Powerful, personal, and sublime this story is a must experience Bodhi moment.