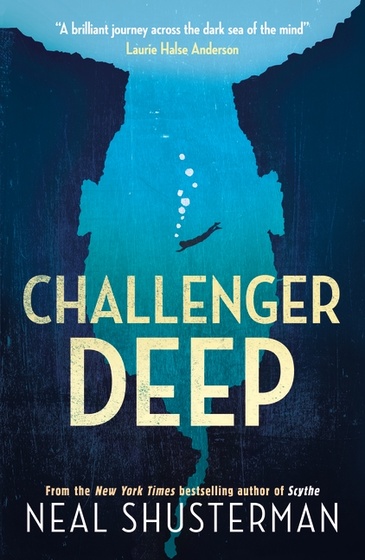 Challenger Deep might not be your typical resort pool-side read but this mind-splitting psychological YA fiction had me from the first glimpse of its ambiguous cover art (of the Australian edition) and the first improbable, incongruous lines: There are two things you know. One: You were there. Two: You couldn’t have been there. Plus, Neal Shusterman, so … this is what accompanied me to the sunbeds.

Deep, mysterious, soul crushing, Neal Schusterman oscillates fifteen-year-old Caden Bosch between reality and madness with unnerving accuracy in an intensely immersive narrative about mental illness. I’m not sure why it took me until now to dip into this one but if stories have a way of finding you at the exact time you need them, then Challenger Deep hit its mark with me.

Life often resembles a rollercoaster ride. In recent times, mine’s been more of a washing machine of anguish and tortured emotions. At least you can open your eyes on a rollercoaster. Let out a scream now and then. Perhaps even get a glimpse of the end. Trapped and tumbling in a washing machine is a far more tumultuous experience, one I think Caden shares with many young, and not so young people.

Caden is smart and artistically gifted. He has a small but tight circle of friends with whom he shares and explores his interests and talents. His family is depressingly normal. He’s the reliable big brother you’d read about but he is markedly torn. He’s supposed to be trying out for the school track team but abandons that quest for something far more portentous. He is designated as the artist-in-residence aboard a ship that’s headed to the deepest point on earth: Challenger Deep, part of the infamous Marianas Trench. His task, although ambiguous at first, is to document the journey under the benevolently tyrannical eye (singular because he only has one) of the Captain.

Life aboard the Captain’s vessel is wretched and bewildering. Crew members are spiritless and recluse. The ship exhibits unnerving elements of enchantment. And there is mounting unease between the first mate (a talking Parrot) and the malevolent Captain.

This is where the superb metaphorical prowess of Schusterman’s tale takes on a life of its own. Close your eyes and it’s not hard to imagine yourself veering through the grody atmosphere of this ship. You want the voyage to reach its destination but are fearful of what happens once it does. At some level, I am sure many of us have felt themselves trapped aboard a ship to nowhere (good). I know I have. It’s simultaneously mind blowing being at sea, alive, and boundless but at the same time, all that nothingness is terrifying. It shrinks one’s soul and promotes extreme desertion. 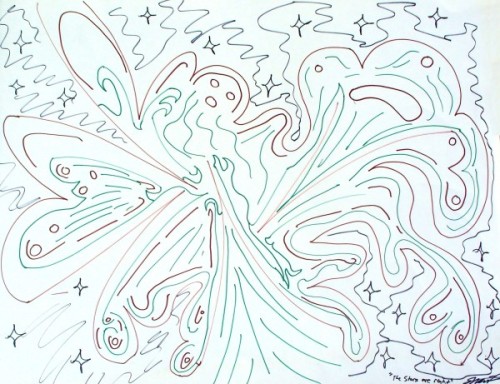 Artwork by Brendan Schusterman
We are saved from utter despair whilst at sea thanks to Caden’s flashes of ballsy bravado. He exhibits fear and fortitude interspersed with welcome comic disdain but is intelligent and compos mentis enough to keep his mouth shut. Or is he? While he wastes time in the crowsnest with fellow crew members and aimlessly walks the streets of his neighbour, his schoolmates are feeling his disconnect more and more. Caden’s ocean voyage, explicit dreams and school yard exchanges gradually weep into each other in a persuasively perturbing way. Caden can barely distinguish between his realities as his schizophrenia takes a stranglehold, however as his existences converge, our realisation focuses, and the parallels of his recovery dawn.

The voyage of Caden's mental decline then eventual phoenix-esque recovery cuts close to the bone but also provides a safe port of comfort for teens and young people enduring their own ocean of mental suffering. The lingering, heart-soaring significance of Caden’s experience is that you are never alone no matter how adrift and disordered you may feel. No matter how much of ‘the Overwhelming Never fills your life. Ever.

I won’t disclose the myriad of other treasures that this story holds. The discovery is all part of the odyssey of life, a journey which wearies and warps some of us more than others but stories like, Challenger Deep evince (young) people that there is always a light to be found even in the darkest of trenches. This is a powerful and transformative read for sufferers of mental illness as well as those who suffer alongside them.

And so, with an uncanny pirate crew, a fathomless fear, and a teen who learns to see beyond the horizon, Challenger Deep proved the perfect metaphorical read to soak up on an island in the Coral Sea. I recommend you take the dive, too.