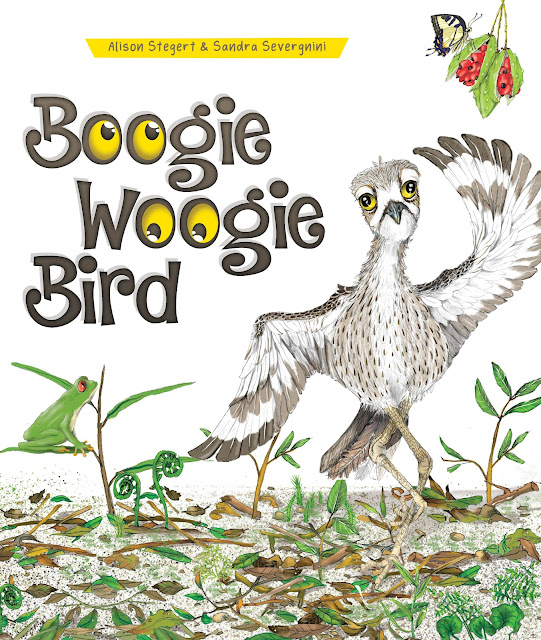 Aside from the groovy sounding title, the thing that strikes you first about debut author, Alison Stegert’s Boogie Woogie Bird, is the jaw dropping detail of Sandra Severgnini’s illustrations.

I have known and lived with curlews, notably, the Bush stone aka the Thick-knee curlew for some time and am gobsmacked by the level of exactness both of these creators have imbued within their adorable character, Curlew.

Curlew cries his plaintive call, alone and forlorn, night after night. He needs a friend, more than a friend in fact. A mate. Someone to share his random pile of leaves with. But his yearning cries aren’t cutting it, at least not for Fairywren who insists that fancy dancing is what he needs to win someone’s heart.

In a priceless, side-splitting promenade of boogie woogie moves, tangled legs and knocked knees, Curlew finally concedes that curlews can’t dance in spite of the detailed instructions bestowed upon him by some of the best ‘dancing’ birds in the business aka Aussie bush. Sad and dejected, Curlew warbles his song of woe which, this time, is answered by a similar knock-kneed, stilt-legged bird who happens to like his less than groovy, just right curlew moves. It’s love at first groove! The stunning endpapers attest the success of this relationship with charming delight.

If you’ve ever heard the mournful, eerie cry of a curlew in the still of the night, you’d be forgiven for mistaking it as the shriek of a child in pain, laden with an intense anguish and ghostlike quality. Yet despite Curlew’s doleful expression and cheerless call, he really is a chummy little character who, once he finds his feet, and learns to spread his wings, discovers true love is gained by simply being the best that you already are. 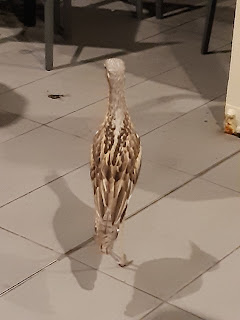 Elusive (not!) Curlew too shy for the camera but game enough to hang out in a tavern!
The generous use of alliteration adds an air of jocularity and complexity for reading aloud which equates to good old-fashioned fun. The considered typography and highlighted dialogue are great for accustoming new readers into the world of speech and language conventions. I also appreciated the deliberate use of friend and mate in lieu of partner or girlfriend when describing various avian hook-ups. And let’s not forget those illustrations.

Jittering and rustling with features so meticulously rendered and visually captivating, you’d swear you were looking at the floor-scape of a real slice of bushland. It’s precisely this curlew-levelled point of view that helps elevate this whimsical story of self-discovery encouraging readers to recognise and understand not only their limitations but also their most alluring attributes, as well. Moral ground notwithstanding, Boogie Woogie Bird is just a delightful book to read and perform aloud and lose yourself in the leaf littered world of gorgeous green tree frogs, lilting ladybirds and beautiful, beautiful curlews.

A great introduction to some less well-known inhabitants of our Australian scrublands that promises lots of fun classroom potential.