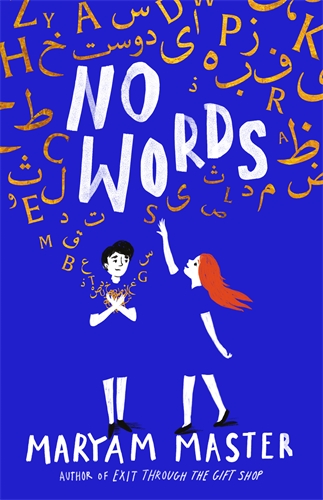 From the author who gave us the heart-jolting ,  Exit Through The Gift Shop , comes another show-stopping middle grade drama.  No Words  pulls no punches telling the story of 12-year-old refugee, Aria and moves with the same tumultuous pace as  Master’s  former novel. Don’t equate the tempo of this narrative with a rushed outcome however because Aria’s tale is told with measured sensitivity and precision. It just happens to be in the same voice as your typical upper primary school kid with as much energetic beat and bounce. Which is ironic when the story centres around Aria’s distinct  lack  of voice. Aria hails from old Iran, Persia having fled his country with his older brother and father. There was no time for goodbyes. No time to mourn the loss of his beloved mother. No time to digest the horror of their situation. We learn through the broken recall of Aria that his mother was persecuted for her liberated feminist beliefs. But that is not the main thrust of this story. Hero and her
2 comments
Read more
More posts