Review: My Shadow Is Pink 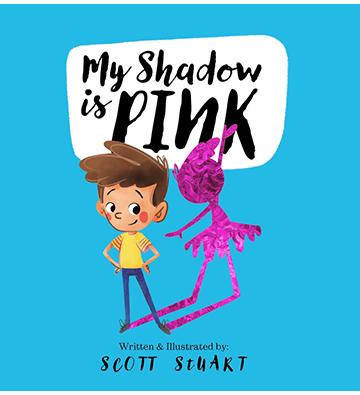 What are little boys made of? Is it really frogs and snails ; everything that is not sugar and spice and all things nice that are otherwise attributed to the makeup of girls? Should blue be the only shade that maketh the man? Debut author illustrator, Scott Stuart blows these outdated tropes well and truly out of the water with this deliriously amusing and tender picture book, My Shadow is Pink . Our intrepid main character’s little face is a picture of consternation after he concedes that his shadow is not the strong blue that trails the other males in his family. His is a delicate shade of rose and mirrors that which he loves most: sparkles, dancing, twirling and dressing up. Despite his father’s reassurances that his shadow will adopt a more ‘manly’ appearance one of these days , and the little boy’s own yearning to fit in with the other acceptable shadow groups, he is unable to dismiss his conflicting feelings. Then one day an invitation to let his shadow dress up in its favour
Post a Comment
Read more
More posts