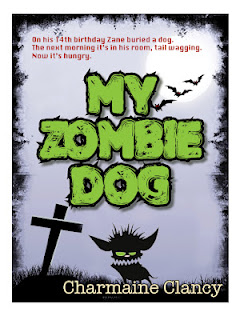 Zombie Dog promises gore, humour and insanity on a canine level and is aimed at our sometimes gory, ﻿often silly and verging on insane, tween market. But before sales go crazy on the1st of March, I managed to pull Charmaine aside to a quite corner of the cemetery and find out a bit more about this exciting new Queensland kids author. Here's what I discovered:
10 Things you didn't know aboutCharmaine Clancy and Zombies
1. This is your debut release. How long have you been writing for? Tried and failed to write novels many times in my youth. What I didn't know then is imagination is not enough, I needed to LEARN the right skills. About 4 years ago, at Uni, I came across a classmates blog; Amy from Ink-Fever. Amy was making her writing a priority. This motivated me to get stuck in and see a novel through to the end.
2. Why did you decide to self p…
14 comments
Read more 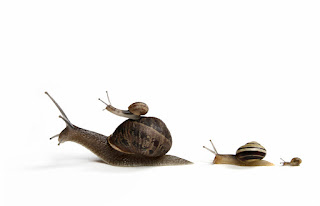 I may not be the most tolerant of people at times. But I do try to be charitable. I turn a blind eye when one of the chooks demolishes a chili plant. I don't mind the fruit bats gorging themselves silly on my guavas and mangoes night after night. I allow the wretched wasps to build their mud condos all over my house because they do such a good job rounding up the spiders and caterpillars for their babies.

But the thing which sets my blood boiling is the nightly, ritualistic, denuding of my veggie patch by those slimy, stealth like, slug faced molluscs that call themselves, Snails.
Don't be fooled by their cute whiskery a﻿pperance here either. Midnight torch raids have revealed a revelry of ruminating renegades. Marigolds droop, caught in a slick skin of slime like something out of Ghostbusters. Whole rows of seedlings are eradicated in less time than it takes to say What's Up Doc?
Honestly, I have enough in my back yard to start my own French bistro.
Apart from actually eati…
Post a Comment
Read more
More posts